The latest CIVICUS monitoring shows that in 2015 one or more of the core civil society freedoms of expression, association and peaceful assembly were seriously violated in at least 109 countries. Global civil society alliance CIVICUS has documented serious violations of the freedoms of association, expression and peaceful assembly in 109 countries over the course of 2015.

The list shows that instead of heeding calls to reverse the trend of closing civil society space, more and more states are failing their commitments under international law and reneging on their duty to protect and enable civil society. Several non-state actors also stand accused of seriously violating civil society freedoms.

The following table briefly summarises the nature of the violations captured in this report:

Of the three core civil society freedoms, the freedom of association was most frequently violated. In other words, the right to set up, join or operate a formal or informal group to take collective action was most imperilled, affecting 85% of the countries. An almost equal number of countries the freedom of expression, which includes the right to seek, receive and impart information and ideas, was violated. In two thirds of the countries on the list, freedom of peaceful assembly, that is, the right to gather publicly or privately to collectively express, promote, pursue and defend common ideas or interests, was violated. 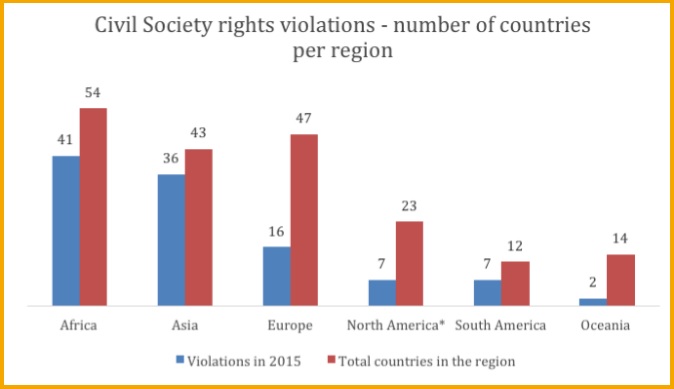 This report and list was compiled based on the analysis of Civil Society Watch reports, and additional monitoring by national and international civil society organisations from the CIVICUS alliance. The following table briefly summarises the nature of the violations captured in this report.