According to the policy brief, published by CIVICUS in November 2017, although civil society in India 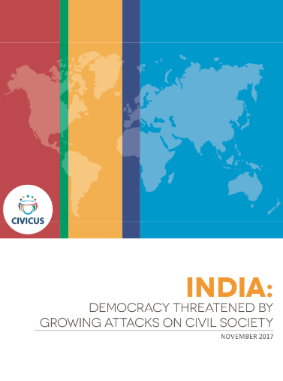 has been playing essential roles ever since the country's struggle for independence, the space for civil society - civic space - is increasingly being contested.

India, which celebrated 70 years of democratic governance in 2017, is often described as the world’s largest democracy, and as such remains a source of inspiration for peoples’ struggles for freedom and human rights around the world. India boasts an active and vibrant civil society, with over three million civil society organisations (CSOs) and social movements fostering socio-economic, political and cultural development, and playing a major role in promoting, protecting and strengthening human rights. CSOs are working to hold the government to account for its decisions and actions and to advocate for policies that advance human rights and challenge exclusion.

However, the quality of democracy and the ability to engage in democratic dissent have shrunk drastically since Prime Minister Narendra Damodardas Modi won power on 26 May 2014. In the years since, many CSOs and activists who speak truth to power and shed light on the actions of politicians and public officials have found themselves targeted by government authorities.

The government uses such tactics as restrictive legislation to deny CSOs their right to register, and in some cases suspends or withdraws CSO permits to operate. Resourcing of CSOs is also being targeted: some CSOs have been prevented from receiving funding from external sources, and some have had their bank accounts suspended, stopping them from accessing funds to carry out their activities.

As a result of recent restrictions, India is now classed as having an obstructed civic space by the CIVICUS Monitor, an online platform that tracks civic space in every country. The obstructed category indicates that power holders contest civic space, undermine CSOs and constrain the fundamental civil society rights of association, peaceful assembly and expression.