A comparative analysis of regulation of civil society organisations’ ‘political activity’ and international funding in Ireland, Netherlands, Germany and Finland. Written by CIVICUS, Irish Council for Civil Liberties, with support from The Community Foundation for Ireland 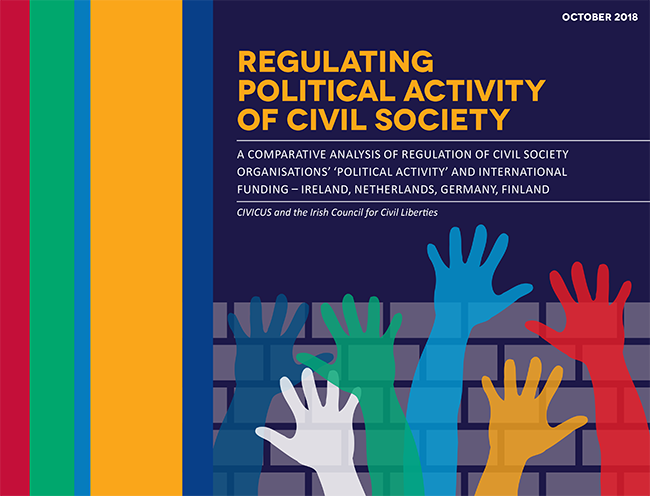 This paper provides a comparative assessment of how the “political activities” of civil society organisations are regulated in Ireland and three other European Union member states. This paper focuses particularly on organisations, such as human rights organisations, which carry out public advocacy activities and rely on international sources for a substantial portion of their funding.

All four countries are rated as “open” by the CIVICUS Monitor, a global platform which tracks respect for civic space in 196 countries. These four  european countries are also well known for their strong promotion of civil society, human rights and democratic freedoms through their foreign policy and international development cooperation on programmes.

Following a brief outline of key international and regional norms, the paper outlines relevant aspects of domestic regulatory systems in Netherlands, Germany and Finland. A final section sets out what Ireland could learn from these examples, with a view to reforming its laws and policies governing “political activities” and foreign funding of civil society organisations.