As the state of civic space in Cambodia continues to regress, CIVICUS, the global civil society alliance, calls on the authorities to halt its persecution of activists, trade union activists, the opposition and others and end all restrictions on fundamental freedoms. The organisation also calls on the international community to increase its pressure on the Hun Sen regime to respect and protect human rights through the UN Human Rights Council and also directly in the country, ahead of the crucial 2023 elections 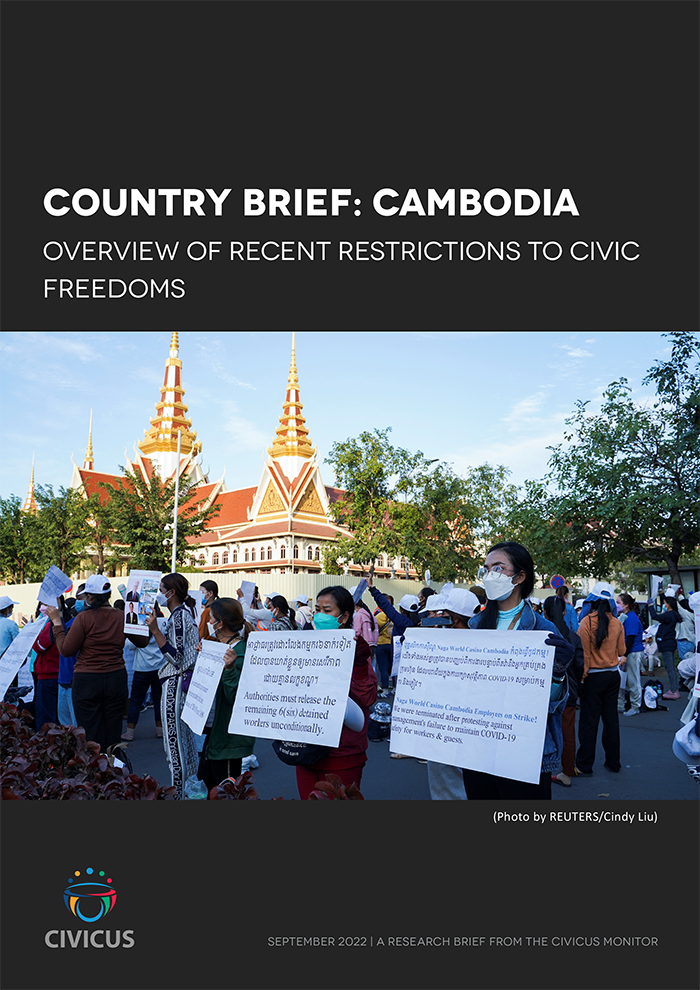 A new CIVICUS brief on restrictions to civic freedoms in Cambodia published today shows that following the Human Rights Council’s resolution adopted on 11 October 2021 there have been no tangible human rights improvements on the ground. Despite ongoing engagement and reporting by the UN Special Rapporteur on the situation of human rights in Cambodia and multiple resolutions at the UN Human Rights Council and recommendations, the Cambodian government has shown no political will to undertake democratic or and civic space reforms.

Cambodian human rights defenders and activists continue to face repression. Over the past year, vaguely worded charges of ‘incitement’ have been systematically used to harass and convict them. Highly politicised courts mean that those arbitrarily detained and charged are often held for prolonged periods in pretrial detention and have no chance of getting a fair trial. In May 2022, the Phnom Penh Appeal Court upheld the baseless September 2018 convictions of four members of the Cambodian Human Rights and Development Association (ADHOC), all of whom were previously imprisoned and convicted on spurious charges of bribery.

Hundreds of workers from the Labour Rights Supported Union of Khmer Employees of NagaWorld (LRSU), a casino workers’ union  continue to face repression for their activism since December 2021. Dozens have been arrested and at least 11 people have been charged. The authorities have blocked roads and dragged strikers, sometimes violently, onto city buses and driven them to the outskirts of the city, dropping them off. This action has been entirely arbitrary without any legal justification or reasoning. There have been incidents of strikers being violently pushed to the ground by the authorities, punched in the face by a uniformed officer and targeted with sexual harassment. Strikers have been detained at quarantine centres on charges of violating COVID-19 protocols.

Press freedom remains under attack in Cambodia. Radio stations and newspapers have been silenced, newsrooms purged, and journalists prosecuted, leaving the independent media sector devastated. A report published by the Office of the UN High Commissioner for Human Rights on 3 August 2022 found that journalists in Cambodia are increasingly being subjected to various forms of harassment and pressure, as well as violence.

Further, the restrictive 2015 Law on Associations and Non-Governmental Organizations (LANGO) continues to be used to restrict civil society groups. In January 2022, the Prey Lang Community Network and the Prey Preah Roka Forest Community Network were forcibly prevented from engaging in forest patrols to document and prevent illegal logging as they are not ‘registered’, a requirement under LANGO.

“Cambodia is a party to the International Covenant on Civil and Political Rights (ICCPR), which imposes obligations on states to respect and protect civic space. Despite the multiple resolutions at the Human Rights Council the authorities have instead continued to target human rights defenders, union activists and journalists with impunity. The government must drop all charges against them immediately as well as take steps to amend or repeal provisions in the Criminal Code that have been used to criminalise dissent” said Josef Benedict, Asia Pacific researcher for CIVICUS

The brief also highlights the ongoing politically motivated criminal charges faced by former members of the Cambodia National Rescue Party (CNRP). On 17 March 2022, the courts convicted 21 opposition politicians and activists on unsubstantiated charges of ‘incitement’, ‘inciting military personnel to disobedience’ and ‘plotting’. The courts convicted another 51 opposition politicians and CNRP activists on 14 June 2022 of ‘incitement’ and ‘conspiracy.’

Members of the ‘Friday Women’ movement who have been protesting since June 2020 against the jailing of their husbands, brothers and other relatives who were affiliated with the CNRP have been subject to heavy-handed tactics including being beaten, kicked, dragged along the ground and, in many cases, arrested. Those who have avoided jail are often followed by the police and subject to surveillance by local authorities.

“The criminalisation of the opposition in the last five years and recent efforts to harass and undermine new political parties during the commune elections is a signal of things to come next year, when the general elections are held. If the international community wants to see a free and fair elections in Cambodia it must step up efforts to call the government out on these violations and initiate stronger action at the Human Rights Council. Failure to do so will see the one-party regime further entrench itself in years to come,” added Benedict.

An interactive dialogue will be held at the Human Rights Council on 5 October with the Special Rapporteur on Cambodia, who recently set out a 10 points rights agenda to improve the human rights situation in Cambodia, including to open up civic and political space and to end prosecution of the political opposition and human rights defenders. CIVICUS calls on States to raise the above concerns in the dialogue.

Cambodia is currently rated ‘Repressed’ by the CIVICUS Monitor. There are a total of 50 countries in the world with this rating (see all). This rating is typically given to countries where civic space is heavily contested by power holders, who impose a combination of legal and practical constraints on the full enjoyment of fundamental rights (see the full description of ratings).

CIVICUS and Asian Forum for Human Rights and Development (FORUM-ASIA) condemn the recent arbitrary arrest of...