MALDIVES: ‘We have come a long way, but more needs to be done to further open up civic space’ 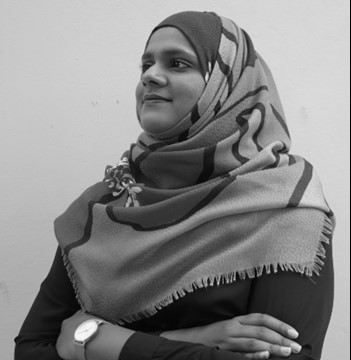 CIVICUS speaks about the situation of women’s rights in Maldives with Safaath Ahmed Zahir, founder and president of Women & Democracy (W&D).
Founded in 2016, W&D is a civil society organisation (CSO) that promotes women’s economic and political participation and good democratic governance in the Maldives through research, advocacy and awareness-raising activities.
What led you to become an activist and found a women’s rights CSO?
Growing up in Maldives, a small island developing nation, the disparities between men and women became evident to me. I came from a majority-women family and witnessed the personal upheavals that my mother endured and how much my family battled for my education. Returning home after studying abroad was an eye-opener for me. In interviewing for a job, I experienced first-hand the deep-rooted patriarchal culture and the double standards women face on a daily basis. So I decided to put my education to good use: to push for women’s rights and empowerment in my country.

I first played a role in creating Women on Boards, a CSO promoting gender diversity in the workplace. This inspired me to try to contribute further to building the organisational infrastructure and community to support women’s economic and political participation in Maldives. The organisation I founded, W&D, is now one of the most prominent in Maldives, with over 300 members, 200 of them aged between 18 and 29.

What are the main women’s rights challenges in Maldives?

Maldives ranked 106 out of 144 nations in the World Economic Forum’s 2017 Global Gender Gap Report. Women are marginalised in the political sphere due to institutional barriers, discriminatory cultural practices and social norms. Despite being roughly half of the population, having a 98 per cent literacy rate and actively participating in political parties, in 2009 only 6.5 of members of parliament were women. The proportion fell to 5.9 per cent in 2013, and again to 4.6 per cent in 2019. Currently, only four out of 87 parliamentarians are women, and few women hold senior public sector roles.

With the passing of the Decentralisation Act, which allocates 33 per cent of local council seats to women, there has been some progress in local governance. The Maldives’ women development committees are an important platform for women to enter into politics and to participate in the decision-making process at local and national levels. But many barriers still limit their fulfilment of their mandate. They should be empowered to achieve true decentralisation.

Women continue to take on the burden of childcare and domestic chores, which makes it difficult for women to engage in economic activities on a par with men. Female labour force participation in Maldives is higher than in other South Asian countries, but women tend to be clustered in low-growth sectors and in lower-paying positions, and they earn less than men. While tourism is the lifeblood of our economy, women make up only seven per cent of the tourism labour force.

Women’s entrepreneurship is generally underdeveloped, and women’s economic contribution tends to be rendered invisible, particularly in major sectors such as tourism, fisheries, construction and wholesale and retail trading. Gendered economic inequalities were exacerbated under the pandemic, reversing what little progress had been made over previous years.

Gender-based violence also remains an entrenched problem. One in three women aged between 15 and 49 have experienced physical or sexual violence at some point in their lives. There is a great need for more and better infrastructure to support survivors.

How is civil society in general, and W&D in particular, working to address these challenges?

Women’s rights CSOs have been working to address these challenges for several years, through capacity development workshops, advocacy campaigns, movement-building and creating opportunities for women and girls.

Six years on from its founding, W&D has become a leading CSO working to protect the rights and improve the lives of women. We particularly advocate for women’s safety, economic and political leadership and for inclusive democratic governance.

Since 2018, we have conducted an annual capacity development programme to advance women’s leadership and political empowerment in partnership with the International Republican Institute. In three years, more than 680 women aspiring to public office and political leadership have taken part in our training activities. In the 2021 elections for local councils and women’s development committees, 83 women who successfully completed our training were elected.

During the pandemic, we launched a rapid response programme for vulnerable women and girls. In response to the dramatic increase in reports of domestic abuse, we established a domestic violence and mental wellness helpline to help women seek the assistance of the relevant authorities, undertake safety planning and connect them with wellbeing resources. We provided survivors with psychosocial counselling and referred the most urgent cases to emergency shelters or other safe spaces. With a grant from the Queen’s Commonwealth Trust (QCT) we were able to assist 130 women.

Also with QCT support, we worked to improve access to menstrual materials for vulnerable women and girls. Approximately 10,500 sanitary materials were distributed as part of our rapid response programme. We have just received additional support to continue our rapid response programme. We expect to assist at least 240 more women and girls within the next eight months.

Additionally, in partnership with the Commonwealth Foundation we have hosted multi-stakeholder discussions and consultations with vulnerable populations, relevant government bodies and CSOs to offer policy reforms to address the needs of the most vulnerable.

This year we implemented a project to help strengthen the capacity of CSOs and community-based organisations working towards women’s empowerment and social development in Maldives. We brought together more than 160 people from various organisations.

How has civil society in Maldives joined the recent global mobilisation wave against gender-based violence?

Over the past seven years there have been many street mobilisations, mainly condemning rape and demanding justice for sexual crimes against women and girls and children in Maldives. Protection gaps in rape laws and barriers to accessing justice have perpetuated the prevalence of sexual violence and the lack of justice for survivors. The dire state of women’s safety in Maldives was highlighted by the 2016 Demographic Health Survey conducted by the Ministry of Health, which showed that one in every four women in relationships had faced physical or sexual violence from an intimate partner in their lifetime. In recent years, the Maldivian community has become more outspoken on the issue, particularly amidst the #MeToo movement, where a lot of Maldivian women came forward with their experiences.

Throughout 2020 and 2021, there were multiple street mobilisations spurred by cases of sexual violence and injustice. In early 2020, following a case of sexual abuse of a two-year-old girl by her relatives, outraged citizens protested against rape and urged the government to protect children from predators. The authorities again came under criticism in mid-2020 after a foreign woman was sexually assaulted and the suspects were released from custody, with reports soon following that one of them was in a position of influence. People gathered outside parliament to protest against rape and impunity.

Following the exacerbating effects of the pandemic on violence and abuse against women and girls, protesters rallied again in 2021 The government has taken steps to address these problems. It ratified the First Amendment to the Sexual Offences Act to improve the definition of rape and strengthen investigations, including by removing burdensome evidence requirements. In 2021, it also criminalised marital rape, marking a significant milestone for the women’s rights movement. But there is still a lot of progress to be made in combating the violence and abuse faced by women and children.

How has the space for civil society action evolved over the past few years?

As a relatively new democracy, the Maldives has taken significant steps towards ensuring civic space freedoms, but there is still a lot of room for improvement.

Following the November 2018 elections, Maldives has experienced legislative reforms and a relative opening up of civic space. A commission was established to probe unresolved disappearances. Maldives drastically improved its position in the World Press Freedom Index, moving from 142 to 87 out of 180 countries. This was made possible by reforms such as the repeal of the 2016 defamation law.

While Maldives has come a long way since its first democratic election back in 2008, more needs to be done to further open up civic space. Over the years, human rights defenders have been targeted and subjected to verbal attacks, including hate speech and death threats, while women activists have faced online vilification and threats due to their work for women’s rights.

CSOs are also under pressure from extremists and hate groups, whose influence in limiting the social and cultural lives and roles of women has persisted. There have been instances of religious scholars advocating for girl child marriage and female genital mutilation, and attempts to suppress women advocates who speak out against these grave violations of women’s rights. Women human rights defenders are specifically targeted and face additional and gender-specific challenges, including threats of sexual violence and rape.

What kind of international support does the Maldives’ women’s rights movement need?

We need the continued support of international partners and collaborators to maintain and advance our work to empower women. As our movement is mainly composed of CSOs, we rely on the generosity of international organisations that identify with our mission to be able to continue to run the projects that are making a difference in Maldives.

We also need continued opportunities for dialogue and collaboration with the international community. The exchange of ideas and information among countries and cultures is inspiring and empowering for women and girls in Maldives, particularly in the areas of business and politics.

International support for Maldivian civic space also plays a significant role in furthering women’s empowerment. This is largely achieved by developing the skill sets of CSOs through workshops and programmes run by our international partners and collaborators.

Civic space in Maldives is rated ‘obstructed’ by the CIVICUS Monitor.