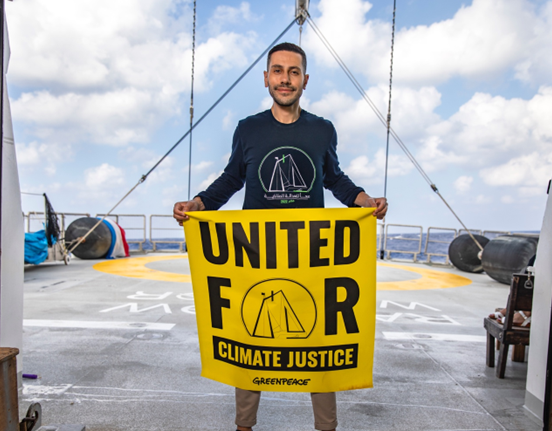 Tariq is Managing Director of 3BL Associates, an ecosystem of social and planetary enterprises working towards regenerative, inclusive and wellbeing-centred economies.

What was the purpose of the Greenpeace United for Climate Justice ship tour you recently took part in?

Greenpeace is sailing throughout Egypt together with climate leaders from the Middle East and North Africa to put climate justice high on the agenda in the lead-up to COP27, which will take place in Sharm el-Sheikh, Egypt. The ship tour is a platform for climate leaders living in some of the world’s most affected regions to promote systemic change around climate adaptation, justice, access to energy and response to the loss and damage associated with the disproportionate impacts of the climate crisis. They are representing the voices of people from across the region, focusing on both climate impacts and the many solutions already at hand.

It's important to spread these leaders’ messages around the world and to make sure their voices are not forgotten during COP27, especially in highlighting the need for climate justice for the global south. For these leaders, this is a collective fight for justice for their countries and communities.

Young people from the across the global south in particular are among the most affected and most marginalised, but also among the most powerful voices. They are not victims, but collectives of solidarity and hope working for a brighter future for all.

What issues should be prioritised at COP27?

COP27 must raise the call of climate justice for the most vulnerable, and also the least responsible for climate change: the people in Africa, in the South-west Asia and North Africa region, and on small islands, among others.

I am from Bahrain, which makes me one of 65 million people who live in small island developing states, representing roughly one per cent of the world’s population. Climate justice, mitigation, adaptation and loss and damage strategies require consistent and regular resources. Small islands typically lack those resources and, being particularly vulnerable to extreme climate events, often face reconstruction costs that lead to more borrowing and debt, which in turn increases their vulnerability.

COP 27 is framed as an ‘implementation COP’, and the climate finance gap and unequal distribution of finance between countries are critical barriers to implementation.

Are you hopeful meaningful commitments will be made at COP27?

The window of opportunity to act is closing. The United Nations Intergovernmental Panel on Climate Change’s 6th Assessment Report offers an even clearer picture of the remaining carbon budget available to stay within a 1.5°C temperature rise and therefore avoid the worst impacts of climate change. While enhanced mitigation ambition is critical, the urgency of implementation is a key concern. Taking into account the pledges fully implemented as of 31 December 2021, total greenhouse gas emission levels are still projected to be 10 per cent higher than 2012 levels.

To truly scale mitigation ambition, it is important that governments don’t just negotiate the text and numbers of pledges but negotiate the very system within which we implement climate action. We need degrowth of the most ecologically harmful sectors of our economy, a global and just transition and transformation towards a post-growth economy.

In a context characterised by short-term political calculations we are completely missing the need for urgent and radical change. I do not expect COP27 to address all this. But there are still some issues that could be meaningfully advanced – in particular, the establishment of the basis for the operationalisation of a Loss and Damage Finance Facility, the details of which could be finalised at COP28 next year.

This is an issue of climate justice towards the many countries in the global south that are particularly vulnerable to the impacts of climate change yet have done little to contribute to the crisis. At the same time, these countries do not have the financial or technological capacity to address these impacts, adapt and pursue a post-extractivist and low-carbon transition. Loss and damage financing can force a rethink around financial commitments and contributions, and pressure for both debt and tax reform as well as renewed financial commitments for mitigation and adaptation.

How concerned are you about the conditions for civil society participation at a COP held in a country with highly restricted civil space?

Civil society participation is always a critical concern at COPs. It’s clear that we can’t have a green and peaceful future without justice, equity, civil rights and empowered communities. That includes the full inclusion of independent civil society as a key stakeholder in climate negotiations. This is why business and civil society organisations have stressed the crucial importance of a rights-based approach to climate action.

As the world transitions toward net zero, protecting the human rights of civil society, workers and communities is key to achieving a just transition. There is significant danger of pledges being made to close the emissions gap while irresponsible implementation strips the rights of civil society. Green transitions in rich countries and ‘green growth’ require significant mineral resources, supplied from the global south, so there is a risk of a neo-colonial mineral rush and a regression of labour rights. It is essential to develop norms, standards and safeguards so that the transition strategies implemented by governments and businesses comply with international human rights and labour standards.

In the context of the COP, this starts with the United Nations taking a much stronger stance regarding the enabling of safe, inclusive and meaningful civil society participation throughout the negotiation process. The COP agenda is largely dominated by global north governments and interests, and civil society perspectives, especially those from the global south, need to find their way into the mix, bringing forward alternative pathways, experience and knowledge.